After my reading sprint in January I decided to take it easy in February. I put aside any “goals” and just read when I felt like it, and I read books that were easy on the brain (and heart).

The first two were fun, quick and easy reads on my Kindle. They’re part of my other goal this year, which is to get rid of all the figurative noise in my life, starting with the clutter that is my home and thereby my life (seeing how I am here 24/7). Many of the pointers in the books may be obvious to most normal people, but I’m convinced I’m not most normal people. I’m overrun by paper in particular and I am struggling to control it. Even worse is that I see my 8 year-old inheriting my disease and I need to intervene now and teach him some tools before the problem becomes too massive to turn around. I want to believe that organizational habits and ways of thinking and seeing things can be trained if done at an early age.

Anyway, I found inspiration in the books because they offer concrete tips on not only how to approach organizational projects but also how to lead a more streamlined life overall. If any of you are suffering from the same ailment maybe I’ll write some posts in the future updating my progress. (I’m finding that the best way to be accountable is to announce your intentions…)

The Gods of Heavenly Punishment was an advanced copy I received to review. (The 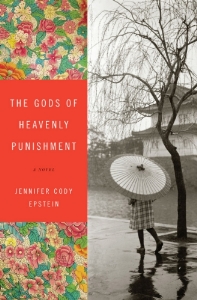 book is due out March 11.) It’s a novel about the intersection of 4 American and Japanese characters – among them an American fighter pilot and a Japanese girl caught in the air raid of Tokyo –  during WWII. The story touches on themes of loyalty, infidelity, survival, love and connection. I found it a lovely story and a very enjoyable read. Despite the weightiness of the subject matter, the novel didn’t feel at all heavy (readers who want something deeper and more raw may be disappointed) and it was good for what I needed in February. I also very much enjoyed Epstein’s writing. The story, to me, is perfectly balanced between the historical details and the personal stories of the characters. I actually emerged a new fan of both Epstein and historical fiction. 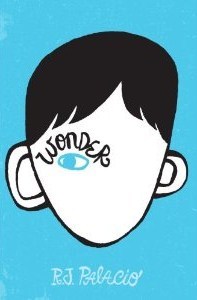 Finally, I read Wonder, which as many of you know is the popular middle grade novel about a 5th grade boy, Auggie, who was born with a facial deformity. The story – about Auggie’s first year in a regular school (he had been homeschooled up to that point) – is told from the points of view of Auggie, his older sister, his sister’s boyfriend, his sister’s friend and his two best friends. (It sounds like a lot but it actually works.) This, too, is a story that deals with a lot of difficult themes like bullying, betrayal and loneliness but it is never heavy or depressing. I actually think of Wonder as an incredible love story because ultimately that’s what it is about – the power of love between parent and child, grandparent and grandchild, brother and sister, children and pets, and friends. And finally, it is about love for oneself. It’s uplifting and sweet.

This was a particularly special book for me because it’s the first book that Fred and I really read together, as in passed between and discussed together. Initially I read it to him, until he got so into it himself that he started taking the book to school or waking up early to read it. When he finished he handed the book back to me, reminding me to start from “November,” which he had remembered as the chapter where I’d left off. He would then check in with me every couple of days asking me what part I’d gotten up to. We had some good discussions, too, and best of all I saw how much Auggie had impacted him. In many ways Fred is such a “typical” action-packed boy who loves video games, fart jokes, insects, and things that go boom and bang. But I honestly think that this book, this book that is so much about feeling, really touched him in a way no other activity has. For several days after he finished he kept asking me if the author was going to write another book about Auggie. I know Fred misses him. So I suggested that he write to R.J. Palacio to ask her that question.

I’m a bit excited that March is National Reading Month, and it looks like my recovering broken ankle has taken a wrong turn in the healing process (not excited about that), so I may be spending more time in bed/on the couch again. In progress this first week in March are:

With or Without You (Domenica Ruta)

I’ll report back on these in a month!

Do you have any good reads you want to share? What’s on your nightstand? And if you are not in that reading place right now, what are you up to and do you have any recommendations (music, movies, t.v., etc.)?

4 thoughts on “My reading challenge: February in review”