Snow Hunters is a novel by the young award-winning writer Paul Yoon. It’s the story of Yohan, a North Korean soldier and prisoner, who is freed after the Korean War and then emigrates to Brazil, choosing a country he has never heard of over repatriation. He goes to Brazil hoping that it will be a place “where there would be no more nights.” 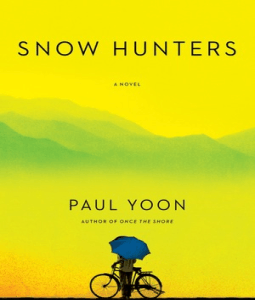 In Brazil Yohan becomes an apprentice to a tailor. The tailor, an older Japanese man who lives alone above his shop, trains him, feeds him, and shelters him. They work together in silence during the day and occasionally talk over beers at night. Over the years they develop a quiet, father-son bond, and yet Yohan never really gets to know him.

During this time Yohan also meets and becomes close to two children, a boy and a teen-age girl. Where they came from and where they live he doesn’t know. It appears that they are orphans. They come in and out of his life.

The book alternates between Brazil and Yohan’s past – his time in the prison camp, a rekindled friendship with an old childhood friend whom he meets again in prison, his father whom he lost when he was sixteen.

It’s a story about understanding and grasping loss – the loss of time, people, and place. There is an elusiveness throughout the book, that a person feels so close and yet simultaneously out of reach.

A haunting image recurs in the novel, that of a loved one fading from view. The person is slipping, slipping, gone…and gone also is the chance to go back in time. There is one more person at the end whom Yohan stands to lose, and we find out on the very last page if he does.

Below is one of my favorite passages from the book about the passing of time:

He thought of these years as another life within the one he had. As though it were a thing he was able to carry. A small box. A handkerchief. A stone. He did not understand how a life could vanish. How that was even possible. How it could close in an instant before you could reach inside one last time, touch someone’s hand one last time. How there would come a day when no one would wonder about the life he had before this one. (pp. 127-128)

I have minimal experience with novellas and poetry and Snow Hunters is both. It is written in prose but it feels like poetry. I picked this up after coming off of a reading marathon, and initially felt relief thinking that I could breeze through it because it is so small. Literally, the book is only a little longer than the length of my hand. But as I soon realized, it is not that kind of a book. It demands you to soak in every word and to translate it onto your own canvas. It was not a difficult or laborious read, but still I worked harder at reading this than I have at any book I’ve read this year.

The book is melancholy, tender, uplifting. It is also gorgeous and deafeningly quiet. I understand from the editor’s note that Yoon had originally written a manuscript of over 500 pages and pared it down to 194. You get the sense that each word is pregnant with meaning. This was a beautiful read, and a powerful study in writing.