I finally read my first Margaret Atwood. I have heard so much about this acclaimed and prolific writer that I was almost salivating to start. Most sources seemed to recommend beginning with The Handmaid’s Tale, and so I did that. 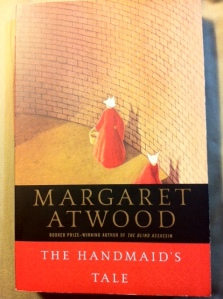 The Handmaid’s Tale, as many of you know, is a dystopian novel written as a fictional memoir by a woman captured in the theocratic regime of the Republic of Gilead. We learn about her story in bits and pieces as she moves along. We know that she didn’t always live under this regime, that once, some years ago, she had been married to a man named Luke, that she had had a young daughter and a regular job, and that she used to wear things like jeans and jogging pants. We never learn her real name, only that she is now Offred, a name designating her as the property of a high level official named Fred.

As we read on we understand that Offred, like other women, is being watched constantly. Along with other handmaids, she wears a red cloak with white wings that shield her face. She is governed by an Aunt. Her activities are limited to eating, sleeping, shopping for groceries, and copulating with Fred – also known as the Commander – once a month in efforts to get impregnated.

The Republic of Gilead was created when the President of the United States and members of Congress were assassinated. The new leadership is a dictatorship of extreme right wing religious radicals, with a goal of repopulating the country after infertility reached crisis low levels due to the ravages of war, radioactive material, etc. They have driven away and persecuted “undesirable” populations such as Jews, blacks, and homosexuals. Women are denied every right and used only for procreational purposes. (Infertile women are sent to work in labor camps.)

Through Offred’s memoir, we learn how she tries to bear her unbearable and uncertain conditions. She flashes back frequently to memories of her husband and daughter, whose whereabouts she doesn’t know. Offred seems beaten down and her best friend Moira, who doesn’t hesitate to challenge authority, calls her a “wimp.”  As the story goes on, Offred does begin to pick up more information and to take on riskier behavior, and the story gets more interesting.

There are a number of themes in the book and numerous religious references (of which I’m not knowledgeable enough to talk about though). One that struck me is the argument that women have it better now that their lives are controlled. As Offred quotes her Aunt Lydia saying, “We were a society dying . . . of too much choice.” (page 25) Women are safer now, this rulership claims, protected. Women used to live in uncertain times, with men who may or may not be faithful and committed, and many did not enjoy respect as mothers. At least in Gilead, women can simply focus on bearing children.

Maybe the most significant fallout of this heavily controlled environment is the loss of human connection. Women are placed in a caste system that encourages alienation and resentment. Romantic or even simply emotional relationships are illegal among most groups and punishable by death. At one point the Commander, starving for such a connection, invites Offred to secretly play Scrabble with him. He asks Offred, “What did we overlook [in our new world]?” and, with some of that power now melted through intimacy, she is able to respond honestly, “Love.” (page 220)

I can’t decide how I feel about the book. I enjoyed it as a story about women and I enjoyed Atwood’s writing. On the other hand, I found the themes interesting but not compelling. For example, the argument that women have it better in Gilead is something that I found too hard to believe…I was hoping for something a little more grey, that would make me think – uncomfortably – hmm, I can see that. Some readers have criticized the story for being far-fetched and it is definitely easy to believe so, until you think about other regimes like the Taliban and North Korea. Maybe the obstacle for me was that there were many holes in the story, due to the fact that this was told from Offred’s point of view, and Offred was essentially a prisoner who was pretty much kept in the dark as to what was happening. Or, it could very likely be that I am not familiar with dystopian literature and so I’m not sure what I should be reading or how I should be feeling.

Overall, as far as storytelling goes, I enjoyed this book and there were times when I couldn’t put it down. It’s chilling and horrific but ultimately there is a sliver of hope. I’m definitely looking forward to reading more books by Margaret Atwood, especially Cat’s Eye and Alias Grace which may be more accessible to me in terms of subject matter (I’m not a huge fan of dystopian fiction, to be honest).

Have you read The Handmaid’s Tale? If so, what did you think of it? What other books of Atwood’s would you recommend? (And a friend/reader tells me that Offred does offer her name! I missed it!)

19 thoughts on “Every woman’s nightmare: The Handmaid’s Tale, by Margaret Atwood”