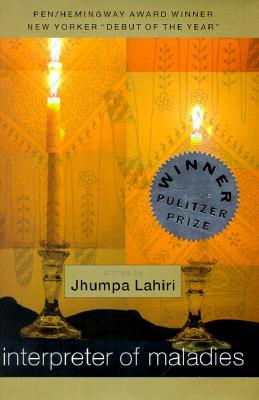 Jhumpa Lahiri up on my reading list. This book had been sitting on my shelves unread for maybe three years.

Interpreter of Maladies is Lahiri’s first published work, a collection of short stories that also won the Pulitzer Prize in 2000.

The stories take place in both America and India although we often get the sense that we’re in both: the characters are making a new life in America or traveling back to India to a country that’s unfamiliar or consoling a friend who’s been separated from his family.

The stories are also about marriage, about secrets and lost connections. The opening story is a powerful one about the gulf that takes place in one marriage after the death of the couple’s first baby. Other characters struggle with infidelity, loneliness, hunger to be noticed, and bewilderment at the behavior and thinking of their partners.

And there are stories of women living on the margins of society in India – the ill, the displaced. They, too, long for connection and belonging.

I’m trying hard here not to resort to cliches or overly dramatic expressions to describe how I felt reading these stories, but the only thing I can say is that I was amazed at how much punch each of these short stories could pack. Lahiri captures the immigrant’s and the outsider’s story with such nuance and poignancy – the optimism, the hope, the alienation, the longing, the loneliness…and all of this is rolled together with the parallel emotions faced in each of the characters’ marriages or relationship with the community. These are stories for anyone – Indian or not, immigrant or not – who’s ever felt a part of themselves empty, who’s ever wanted to be full and yet not known how to feel whole.

31 thoughts on “The gulfs in marriage and home: Interpreter of Maladies, by Jhumpa Lahiri”