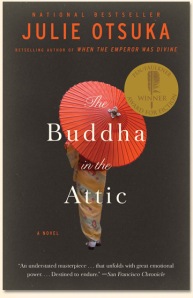 The Buddha in the Attic is Julie Otsuka’s 2012 PEN/Faulkner Award-winning novella about Japanese picture brides trying to start new lives in California during the first half of the 20th century.

The book opens with the young women’s journey at sea. They are frightened, nervous, hopeful, excited, and uncertain about what awaits them. They are from different walks of life and from different parts of Japan, but they all have in their hands (or in the sleeves of their kimonos) the photos of hope: handsome, young men who have promised that they can provide for them well in the new country.

Once the brides are literally off the boat, they cannot find the faces to match their photos. The young and handsome businessmen are, in fact, older, haggard, and sometimes cruel farmworkers and laborers. It hits the women at this point that they have been deceived and, unbeknownst to them, that this is only the beginning.

The chapters that follow cover the new wives’ lives over the next few decades: marital rape, infidelity, hard labor and long hours, sexual harassment, the struggles to care for their children, children who reject them and are embarrassed by them, acculturation, racism. The book ends with the mass exodus of these now Japanese-American wives and their families and neighbors to internment camps as per Franklin D. Roosevelt’s Executive Order issued shortly after the 1941 bombing of Pearl Harbor.

I’ve read other longer, more plot-driven books about the immigrant experience and I was surprised at how powerful this experimental novella is. This is both for your information and a warning: Otsuka’s narrator is a lyrical, first person plural. The book doesn’t focus on any single character or even a handful of characters, but instead covers the range of experiences of the collective group of brides. Here is an excerpt from the second chapter, entitled “First Night”:

I didn’t feel that the narration took away from the intimacy I felt with the characters’ experiences (though admittedly it is a different kind of intimacy) and in fact maybe it is the collective voice that makes this book so powerful: seeing the range of experiences drove home for me how much these women were going through and what it meant to be a picture bride in a country that was, at the time, still very hostile to unfamiliar cultures.

The women in this book arrive as strangers to both their Japanese-American husbands and America. It is a tale about what it’s like to land in hostile and unfamiliar hands, and it is as much about marriage (and its disappointments) as it is about immigration. The issues are heavy but somehow Otsuka’s writing translates the difficulties and hopelessness into something that is emotionally impactful and not bleak. I would have read this book in one or two sittings if I had the uninterrupted time (I read it in three); I thought it was wonderful.

11 thoughts on “Disillusionment in marriage, home, and life: The Buddha in the Attic, by Julie Otsuka”