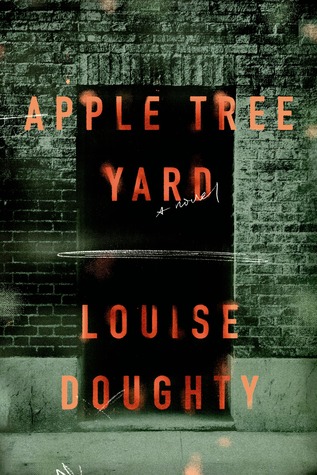 I recently finished reading Apple Tree Yard by British writer Louise Doughty, whose last novel Whatever You Love was longlisted for the Orange Prize (now known as the Baileys Women’s Prize for Fiction) and shortlisted for the Costa Novel Award.

It’s a mystery/suspense tale that opens with 52-year-old Yvonne Carmichael sitting on the witness stand in her own trial. She has been accused of being an accomplice to murder. After the chilling prologue, Yvonne takes us back about a half year or so, to the day she meets X (the only name we have for him at this point). She is on a lunch break after presenting before a governmental committee, and she catches his eye and vice versa. He begins walking with her, and then guides her down one set of stairs after another, until they are alone in the basement of an old chapel. In this way their affair begins.

Yvonne addresses the entire novel to her secretive, unnamed lover, calling him “you.” Through her story we understand the context of this affair and where she is in her life. She is an accomplished and respected geneticist. She is married to another academician, lives in the suburbs, and has two grown children. Her marriage is stable, familiar. Her husband did hurt her some years back, but she has chosen to stay in the marriage. She has a troubled son with whom she has a tenuous relationship, but she loves him dearly, and is desperate to do the right thing not to drive him away.

Yvonne, though a semi-unreliable narrator, is a nice, “normal” woman, the grown-up girl next door who always did well in school, followed the rules, and tried her best to have a quiet, meaningful life juggling career and family. She says, “Until I met you, I was not the sort of woman to throw caution to the wind” (page 44), and “I suppose there are two types of adulterers; the repeat types, and the one-offs. I fall into the latter category. I would never have had an affair if I hadn’t met you.” (page 311)

One night, Yvonne is attacked. She chooses not to tell her husband or her girlfriend and confides only in X. From here a series of events unfold like the kind of nightmare that one sees happening only to other people on television. In less than a year that she’s begun this affair, Yvonne finds herself facing a potential prison sentence.

I was captivated from beginning to end. The premise of the story itself is not all that original – so many stories have been written about love affairs gone awry – but what also kept me engaged is the psychological tale of a woman trying to find meaning, or something, in midlife. Yvonne is a woman who could be a colleague or a friend or a neighbor, someone who has it “all,” at least within the limitations of real life. Reading this book was like reading a long letter from a good girlfriend who is smart, successful, witty, unsure, flawed, and vulnerable. I think that many of us can see pieces of ourselves in Yvonne.

I also sensed the emptiness she feels in her life, a life in which she is hungry for connection with the opposite sex. She hasn’t seen her son in two years but fears driving him away if she comes too close. Her husband is married to his work and they haven’t had sex in three years. As a woman scientist, she is wary of licentious looks and power plays with male graduate students. About being propositioned by a male student who is depending on her external review of his dissertation, she says: “Maybe he wanted to f*ck me because he knew that I had indeed – simply by being who I was – already f*cked him.” (page 53) And in comparing her relationship with her husband with that of her lover, she describes the former as being full of knowledge of one another but with little intimacy, and the latter as being void of knowledge but filled with intimacy.

But even someone of her age, professional status, and confidence is ultimately reduced to the primitive and physically weaker position of woman. This is Yvonne’s internal struggle when she attempts to finalize an email asking her attacker to stop contacting her:

“Before I hit Send, I look at those two sentences for a long time. I shouldn’t be saying “please.” I should be telling him, not pleading with him. ‘Please’ was what I said, repeatedly, during the attack, and much good it did me. But if I leave it out, it’s an imperative, a command, and that might anger him. It comes to me with great force, and it is a sober and simple thought, that I am very afraid of him, viscerally afraid . . . Fear fought with my education, my achievements, my politics: fear won. ‘Please’ stayed in.” (page 138)

23 thoughts on “A Suspenseful Tale of Adultery, Power, and Womanhood: Apple Tree Yard, by Louise Doughty”