Too much work and too little sleep this week…I’ve missed being able to read and write! 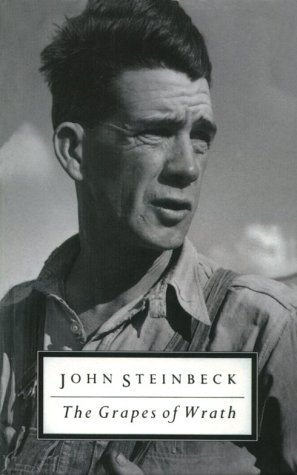 Grapes of Wrath, in case you haven’t heard about it. April 14th marks the 75th anniversary of its publication and so NPR will lead three book club-type discussions between March 3 and April 14. A Steinbeck expert will join the discussions on April 14 to answer questions from readers. Here is the reading and meeting schedule from NPR’s website:

The Grapes of Wrath follows a family of poor tenant farm workers who have been driven out of Oklahoma due to poverty (the story is set in The Great Depression) and drought. There was great controversy when the book came out because of Steinbeck’s explicit depiction of the way poor migrant farmers were treated. Nonetheless, it became the bestseller of 1939 and it won both the National Book Award and the Pulitzer Prize. In 1962, the Nobel Prize Committee cited The Grapes of Wrath as a major reason for awarding the Nobel Prize in Literature to John Steinbeck. (Source: Wikipedia)

I’ve been pretty eager to read The Grapes of Wrath ever since I finished (and loved) East of Eden last year, and I was lucky enough to have found a like-new copy of it at a local library sale last year. This seems like the perfect opportunity and reading schedule for me so I’ll definitely be following along.

Have you read The Grapes of Wrath? Do you want to join in on the NPR read-and-meet?

27 thoughts on “NPR Read-Along: The Grapes of Wrath for its 75th Anniversary”