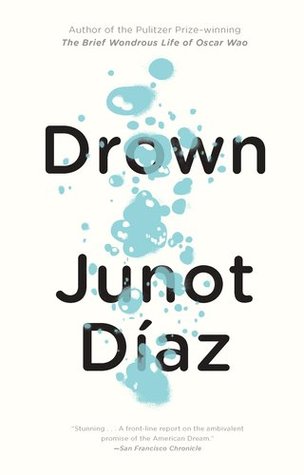 .
The fact that I
am writing to you
in English
already falsifies what I
wanted to tell you.
My subject:
how to explain to you that I
don’t belong to English
though I belong nowhere else
–Gustavo Pérez Firmat

And so begins Drown, Pulitzer Prize-winning author Junot Díaz’s first short story collection that he jokes “no one ever reads.”

Yunior is 9 years old in the first story “Ysrael.” He is staying with his brother Rafa and aunt and uncle in the Dominican Republic countryside one summer because his mother is working long hours at the local chocolate factory. Yunior’s father is in the U.S., supposedly working hard to one day send for the rest of his family. In “Ysrael,” guileless and eager-to-please Yunior follows his bored and brutish older brother around, listening to his tales of sexual exploits and accompanying him as he goes to torment the disfigured boy, Ysrael. Slowly, we watch Yunior lose his innocence.

Young Yunior grapples with the fear that his father will never come for them, and later, with the knowledge that he is cheating on his mother. Often it seems, Yunior is longing for either the physical or emotional presence of his father. Yunior’s mother is the anchor in his life but even she, too, eventually drifts away. There is a particularly poignant passage in the story “Aguantando,” heartbreaking in its youthful resignation. “Aguantando” is about the family’s dashed hopes following the father’s many promises to send for them, and Yunior’s mother falls into a depression, leaving her children behind to stay at her sister’s for several months. Of the aftermath Yunior writes:

She didn’t treat me badly on her return but we were no longer close; she did not call me her Prieto or bring chocolates from her work. That seemed to suit her fine. And I was young enough to grow out of her rejection. I still had baseball and my brother. I still had trees to climb and lizards to tear apart.” (page 84)

Without being sentimental or feigning a child’s voice, Díaz seems to capture well the melancholy of a child who longs for parental love while trying to accept what he cannot control. It is interesting to later read This is How You Lose Her and see how the dysfunction has impacted Yunior’s adult attempts at intimacy.

Several of the stories are told from Yunior’s viewpoint while the narrators of the others are unclear. But together the collection paints a vivid picture of the struggles, hopes, and disappointments endured by immigrant families. More specifically, the stories give voice to immigrant adolescent males struggling to love, receive love, and find purpose within the context of barrio life and a machismo culture. Díaz’s writing is spare and poignant but gritty and honest. You can read the strong language, sex, drugs, and petty crime at a superficial level, but palpable beneath all of that is the hurting of Díaz’s characters.

There is some unevenness in the stories but on the whole I was personally touched by this volume. The themes of belonging and daring to hope hit home for me as an immigrant. But I also read this book as a daughter, wife, and mother, and just as powerful for me were the themes of familial connection and sacrifice and coming of age.

14 thoughts on “On Loss and Hope: Drown, by Junot Díaz”