Our book club Literary Wives’ most recent read was The Crane Wife, by Patrick Ness. 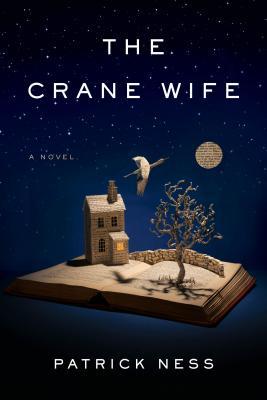 The Crane Wife is a modern spin on an ancient Japanese folktale about a wounded crane that turns into a woman. In Ness’ version, a middle-aged divorced man named George finds a gigantic, wounded crane in his backyard one night. He removes the arrow from the wing and the crane takes off. The next day, a beautiful woman named Kumiko enters his print shop and George falls in love with her. They share their art work and soon begin a relationship.

I didn’t finish the book. I got to page 99 and after a lot of debating back and forth (with myself and with my family) I decided to put it down. These are the reasons why:

Chapter one describes George being jolted out of bed by a loud noise, and meeting the mystical crane in his garden. It starts:

What actually woke him was the unearthly sound itself – a mournful shatter of frozen midnight falling to earth to pierce his heart and lodge there forever, never to  move, never to melt – but he, being who he was, assumed it was his bladder. (page 5)

Honestly, he began to lose me at “bladder.” And I was so in love with all the words preceding that.

On the next page there is a whole paragraph about George completing the urination process, shaking the urine off his penis and drying the tip with tissue. The paragraph following that describes him dropping the tissue into the toilet bowl and flushing it. As the sole female member of my household I am no stranger to male bathroom habits or humor, but this just seemed like TMI to me and completely out of place within the more poetic language on the pages.

The entire second chapter is dialogue with no tags. This is how it opens:

‘But this says Patty.’

‘Yes, that’s what it says here on the order form, too.’

‘I suppose they could have thought it was for your wife.’

‘My wife is called Colleen.’

‘Well then Patty would have clearly been wrong for her –‘

??? Chapter 2 is clearly not taking place in George’s bathroom or backyard. It took a little bit of effort for me to figure out who was talking and where. I’ll also admit that I tend to be more conservative when it comes to narrative styles, and by this point I was starting to grumble audibly. I felt the author was trying too hard to be clever.

I probably didn’t go far enough in the book to give Amanda a chance, but I found this woman annoying. Amanda is George’s grown daughter and has a hard time getting along with people. At this point in the book I wasn’t sure what her role was in the story. Ness’ constant use of italics also grated on my nerves (e.g., “Because it wasn’t like that. Well, it was. But it also wasn’t.” page 54)

I kept reading though my heart wasn’t in it. I didn’t hate the book and I was somewhat curious as to how George’s relationship with Kumiko would turn out. But  returning to the book each night did begin to feel more like homework, and in a sense it was homework because this was an assignment for our book club. So this is where all my debating started. If I had been reading it simply for myself, I would have put it down. Then I remembered an email conversation that we had as a group following The Zookeeper’s Wife, and someone mentioned that not finishing a book is also telling of the book. I finally decided to stop, and to expend my (limited) energy elsewhere.

Again, I didn’t hate this story. In fact, I appreciated and enjoyed Ness’ lyrical writing style. If I had picked it up at a different point in my life, I probably would have finished it. This book enjoys many superlative reviews from readers so do give it a try if it sounds like something that might be up your alley. In particular, do check out the reviews of my fellow book club members to see what they have to say about the book I couldn’t describe in full!

Ariel of One Little Library

17 thoughts on “Literary Wives: The Crane Wife, and Why I Didn’t Finish It”