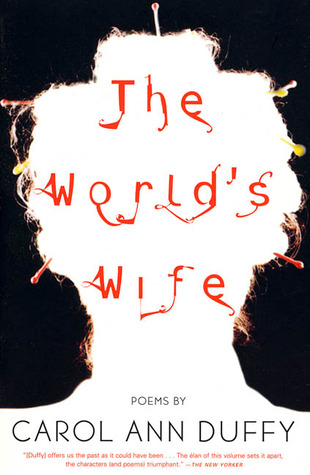 In The World’s Wife we are introduced to the women – lovers, partners, sisters and wives – of some of the most well-known men in Greek mythology, the Bible, history, literature and pop culture. We hear from the women themselves, from Mrs. Faust to Frau Freud to Medusa, and the voices are often surprising. They’re irreverent, sarcastic, angry, sad, triumphant, bawdy, spiteful and, not infrequently, laugh-aloud funny. Here are my responses to the two questions we explore with each of our Literary Wives reads:

1. What does this book say about wives or about the experience of being a wife?

Being a wife is not a happy thing. In these poems, it is about putting up with egos, living in shadows, being neglected. Through the fictional voices we are imagining what it might feel like to be the wife of one of these famous men. Mrs. Aesop is tired of her husband’s moralizing; the loyal Mrs. Quasimodo, Quasimodo’s physical equal, is betrayed by her husband when he falls in love with someone more attractive; and even Eurydice, whose husband Orpheus loves her and tries to get her out of the underworld, prefers to stay in Hades, apart from him. She would rather be dead than to not have a voice, to live in her husband’s artistic shadow:

Big O was the boy. Legendary.
The blurb on the back of his books claimed
that animals . . .
flocked to his side when he sang . . .
Bollocks. (I’d done all the typing myself,
I should know.)
And given my time all over again,
rest assured that I’d rather speak for myself
than be Dearest, Beloved, Dark Lady, White Goddess,
etc. etc.
In fact, girls, I’d rather be dead.

2. In what way does this woman define “wife”—or in what way is she defined by “wife”?

The women in the book grasp for power where they can within the confines of their relationships. To continue with Eurydice, she ends up appealing to Orpheus’ ego, in order to trick him into turning around to look at her, an act which causes him to lose her back to the underworld. Mrs. Midas, tired of her husband’s obsession with material wealth and his thoughtlessness toward her, eventually leaves him. Mrs. Icarus and Mrs. Aesop view their husbands with scorn and condescension. About their disappointing sex life, Mrs. Aesop says, “I gave him a fable one night / about a little cock that wouldn’t crow, a razor-sharp axe with a heart blacker than the pot that called the kettle. / I’ll cut off your tail all right, I said, to save my face. / That shut him up. I laughed last, longest.” (page 11)

The poem in which I found a defining message about wifehood, though, is Mrs. Beast. Here she warns about princesses and princes and happily ever after:

. . . The Little Mermaid slit
her shining, silver tail in two, rubbed salt
into that stinking wound, got up and walked,
in agony, in fishnet tights, stood up and smiled, waltzed,
all for a Prince, a pretty boy, a charming one
who’d dump her in the end, chuck her, throw her overboard.
I could have told her – look, love, I should know,
they’re bastards when they’re Princes.
What you want to do is find yourself a Beast. The sex
is better.

A celebration of love and partnership these poems are not. But I did find The World’s Wife a sharp, clever and witty read. Though many of the women were cattier than my preferred tastes in women’s voices (many of the poems reminded me of the darker side of female conversations bashing boyfriends and husbands), I read this collection for what it is. I enjoyed the modern and feminist twists on traditional and historical stories as well as the opportunity to revisit various cultural and historical references. (I kept my iPhone by my side to look things up while reading.) As a novice poetry reader, I also found this collection very accessible. My favorite Literary Wives read so far!

Please also check out my fellow Literary Wives club members to read their takes on the book!