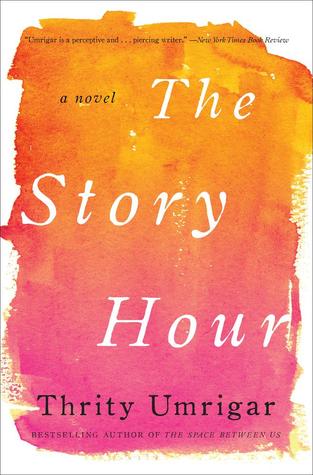 The Story Hour by Thrity Umrigar is about the friendship of two women from two different cultures, whose complicated personal histories and cultural values eventually lead to judgment and misunderstanding and threaten to end their relationship.

Lakshmi is a 30-something woman who immigrated to the US from India to join her Indian husband, a store and restaurant owner. As we are introduced to Lakshmi, we begin to understand how lonely she is in the US and in her marriage. She feels no love from her husband who treats her more like a possession than a partner and who has forbidden her from ever contacting her family again. Lakshmi tries to kill herself one night (this is written on the back cover), and while hospitalized is assigned to talk to Maggie, an African-American psychologist.

Lakshmi’s husband scoffs at the idea of therapy and tells Maggie they cannot afford it. At that point Maggie tells them that she will meet with Lakshmi in her home without charge.

With the therapy sessions Lakshmi gradually comes to develop a voice for the first time, encouraged to believe that her stories are worth telling. As she tells her stories and becomes braver in her trust in Maggie, she reveals more and more, and we learn that her marriage to her husband is not what it seems.

At the same time, and unbeknownst to Lakshmi, Maggie is dealing with her own issues in her marriage and questioning how much her abusive relationship with her father has impacted her and her relationships to this day.

Toward the latter half of the book, the issues of the two women clash and come to a head, and both are reeling in their judgment of one another. Both are not the people they had imagined the other to be.

I enjoyed this book quite a bit. To me it was women’s literature without being chick lit. There is the cultural piece, for those who want to read “diversely”; as an Asian-American who’s very familiar with how it feels to have one foot in one culture, I saw well the cultural differences that Lakshmi and Maggie were dealing with. Do you honor family or do you honor yourself? Is passion in marriage more important or duty? In very traditional Asian cultures, it is often hard to have both.

Mostly, I enjoyed the psychological complexity as I’m always drawn to stories of basically good human beings who are confronted with difficult life decisions and choices. I thought this was an intriguing study of two women with complicated histories that are made more complex by the cultures in which they grew up. It’s also an interesting story about women’s friendship and the expectations we have for our women friends. We can want and love so much and at the same time be very judgmental and unforgiving. In the case of Lakshmi and Maggie, I’ve wondered how much each was projecting on to the other, and did judging the other make it somehow easier to accept (or not think about) one’s own mistakes? This would be a fun book to read in a book club.

11 thoughts on “Women’s Friendships, Women’s Voices, in The Story Hour”